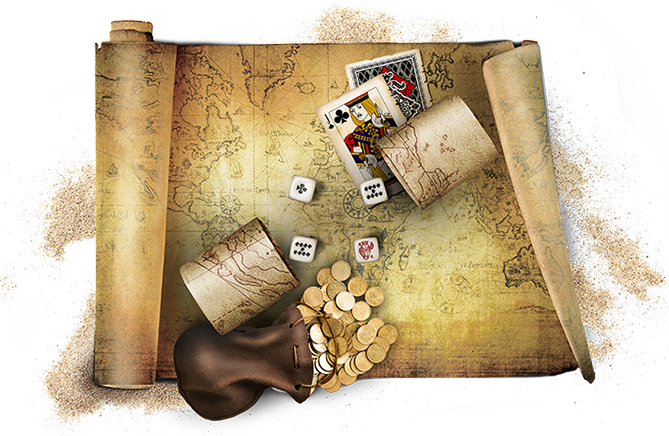 Gambling is considered to be one of the oldest types of entertainment and there are many versions on how and when it really originated. The essence of gambling is to invest money in a game of chance or fortune with the risk of losing it, but if successful – gain larger winnings. The desire of these people to win and gain greater resources by relying on luck is called a passion for gambling.

Based on evidence found by historians, it is believed that people have been gambling since the times of ancient civilizations. For example, the Romans wrote stories about gambling, where both peasants and emperors played games with dice. There is also proof about gaming and fighting, as well as gambling debts. Moreover, dice themselves have been found at the ruins of Pompeii.

Some also claim that in ancient China (about 3,000 years ago) dice were also used, mainly to divide a country’s territory. This is how, in the 100th year of the current era, the kings of Sweden and Norway decided to find out which country will own the Hising territory. The story of how leaders of countries solved problems with dice instead of wars or diplomatic discussions is known all around the world.

Whereas cards, according to historical facts, originated in China in the 9th century. It is argued that cards were a consequence of the invention of paper in China which, in turn, led to the adoption of paper money all around the world. Later on, cards were distributed in Asia, made their way to Egypt and finally Europe only in the 14th century, when 52-card decks were already established and are used to this day.

One of the world’s most popular gambling games – roulette- was created in 17th century France. Soon roulette (or the “little wheel”) gained popularity all over Europe and, after some time, crossed the Atlantic Ocean, where it became one of the most popular forms of entertainment among Americans during the Gold Fever.

In the 18th and 19th centuries, games such as Blackjack and Poker were also invented, which became an essential part of Europe’s and America’s entertainment life.

In the 20th century, slot machines experienced several important development stages. To reduce the cost of production and make the process simpler, the original metal slot machines were replaced by wooden ones, which also reduced the big noise caused by coins clinking and roll rotation. Over the years, colours and various theme games were added to slot machines which, in turn, attracted the attention of women and became a popular way to spend time.

The most important period for slot machine development was the 20th century. In the 1960s, mechanical slot machines were replaced by electromechanical ones, which were considered much more reliable and opened up new development opportunities. Even though the game was fully electrical, at first, the lever was still preserved, which was soon replaced by the action buttons on the panel. Just a few years later, the first video slot machine was invented with the first 19-inch screen, which quickly gained wide popularity.

The internet-boom in the middle of the 1990s resulted in the first online casinos, where, at first, only classic casino games were available, for example, roulette and blackjack; though, soon they were joined by nearly all of the slot machine, card and board games that were available at land-based gaming halls. In recent years, the development of computer programming has made the development of new games much easier, which led to the creation of new and interesting game types with unusual arrangements and structures that attract more and more new players.